The Girl Explorers: The Untold Story of the Globetrotting Women WhoÂ Trekked, Flew, and Fought Their Way Around the World

The Girl Explorers: The Untold Story of the Globetrotting Women WhoÂ Trekked, Flew, and Fought Their Way Around the World

Never tell a woman where she doesn't belong.

In 1932, Roy Chapman Andrews, president of the men-only Explorers Club, boldly stated to hundreds of female students at Barnard College that "women are not adapted to exploration," and that women and exploration do not mix. He obviously didn't know a thing about either . . .

The Girl Explorers is the inspirational and untold story of the founding of the Society of Women Geographers—an organization of adventurous female world explorers—and how key members served as early advocates for human rights and paved the way for today's women scientists by scaling mountains, exploring the high seas, flying across the Atlantic, and recording the world through film, sculpture, and literature.

Follow in the footsteps of these rebellious women as they travel the globe in search of new species, widen the understanding of hidden cultures, and break records in spades. For these women dared to go where no woman—or man—had gone before, achieving the unthinkable and breaking through barriers to allow future generations to carry on their important and inspiring work. 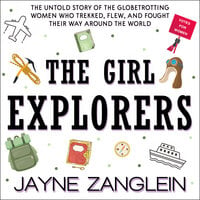