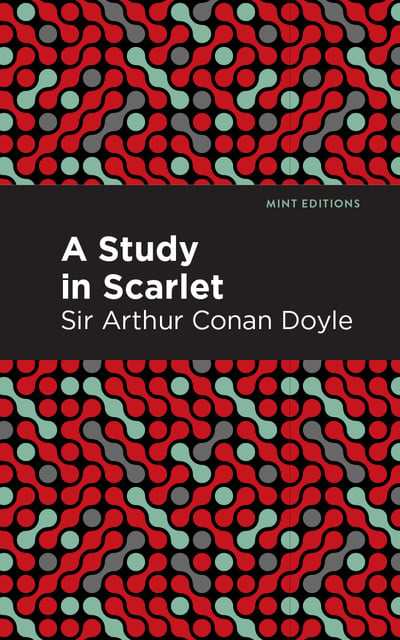 A Study in Scarlet

A Study in Scarlet

Now, as in this lifetime, cab drivers, statesmen, academics, and raggedy-assed children sit spellbound at his feet. No wonder, then, if the pairing of Holmes and Watson has triggered more imitators than any other duo in literature. ”-John Le Carré

“The immense talent, passion and literary brilliance that Conan Doyle brought to his work gives him a unique place in English letters. ”-Stephen Fry

”Holmes has a timeless talent, passion and literary brilliance that puts him heads, shoulders and deerstalker above all other detectives. ”- Alexander McCall Smith

Arthur Conan Doyle’s A Study in Scarlet (1888) is the first of four of the original Sherlock Holmes novels and introduced the world to the most famous detective duo in literature. From the initial discovery of a corpse in a deserted house in London, to the wild west of the pioneer days of Utah, this is transatlantic crime adventure steeped in mystery, romance and delectable revenge. A Study in Scarlet was initially published in the magazine Beeton’s Christmas Annual in 1887 to little fanfare, yet was the foundation of the 56 stories, four novels, and the portrayal of the character of Sherlock Holmes in hundreds of literary, film, television and stage adaptations.

In the first of the Sherlock Holmes novels, the reader is initially introduced to Dr. John Watson, who has returned to London after sustaining injuries in the Anglo-Afghan war. Looking for cheap lodging, he settles on sharing a flat at 221B Baker Street with a laid-back yet eccentric roommate named Sherlock Holmes. Watson is perplexed at the theories of deduction that his new acquaintance s developed, until his occupation of Consulting Detective is revealed. Subsequently, a telegram arrives from Scotland Yard requesting the aid of Holmes’s talents in a mystifying murder case. In an empty house in Brixton, the body of Enoch Drebber has been found. When both Holmes and Watson arrive at the crime scene they find the body of the poisoned victim, with the word “Rache” written in blood on the wall. Through other clues, including a wedding ring found in the trousers of the victim, the context of the crime seems nearly impenetrable. When a second body is discovered, with the word “Rache” once again scrawled in blood. With his astounding skill, Holmes is able to lead the killer directly into his trap. Once the killer is revealed, it is his heartbreaking story, set in the lawless wilds of the pioneering days of the American West that is told.

With an eye-catching new cover, and professionally typeset manuscript, this edition of A Study in Scarlet is both modern and readable.