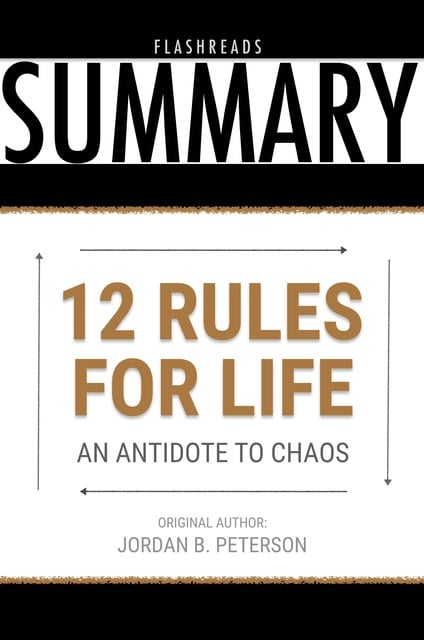 12 Rules for Life by Jordan B. Peterson - Book Summary

12 Rules for Life by Jordan B. Peterson - Book Summary

Book Summary: "12 Rules for Life" by Jordan B. Peterson
Book Summary by FlashBooks

Important note - This is a Book Summary of "12 Rules for Life" by Jordan B. Peterson - this is not the original book.

About | 12 Rules For Life: An Antidote To Chaos by Jordan B. Peterson

Over the years, (former) Harvard and (current) University of Toronto professor and clinical psychologist Dr. Jordan B. Peterson has developed what he believes to be a definitive set of rules for leading a successful and fulfilling life. Originally conceived of with 40 rules, Peterson has condensed them into a well-thought-out, manageable list of 12 total rules that he shares in this book. He believes strongly in truth-telling, human hierarchy, and gender roles. He believes that suffering is an inevitable aspect of life, that we can usher in heaven or hell on earth, and that people have it within themselves to create order out of chaos. It’s also worth noting that this is an aggressive, in-your-face kind of Self-Help book — one which he packages and presents as the intersection of “ancient wisdom” and “scientific research.” Much of the ancient wisdom seems to come from religious scripture, while scientific research serves as a way to back up the beliefs the author already holds near and dear to his heart. Nonetheless, however—regardless of whether you consider yourself religious, un-religious, or somewhere in between—this is a powerful book that can help you develop a higher sense of self-discipline and self-reliance.

Here’s What You'll Learn About in this Book Summary

- The powerful impact of always telling the truth—no matter what.

- The benefits of paying close attention to the world around you.

- How to turn life’s most chaotic situations into successful ones.