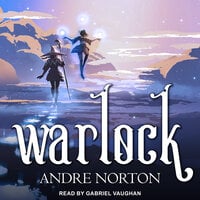 In a sweeping generational saga, the story of Warlock is told by three humans:

Shann Lontee was the lowest-ranking member of an exploration team sent to the newly discovered planet Warlock. When the insectile Throgs attacked the base, only he and two trained wolverines escaped. Hunted by the Throgs, he and the wolverines had to survive without technology on an alien world. Then he discovered the Wyvern, who were his only hope—if they weren't an even more deadly menace than the Throgs.

Charis Nordholm was sold into slavery by the outlaw colony on the planet Demeter. The trader, Jogon, who holds her contract, was on his way to Warlock to trade with the Wyvern. But the alien witches had ominous plans of their own, and both Charis and Shann Lantee found themselves fighting for their lives.

Ziantho's mental powers had made her a valuable asset to the interstellar criminals she worked for. Then she encountered a gem of ancient power and stole it. Pursued both by the stone's owners and the agents of the Patrol, she fled across the galaxy and encountered Ris Lantee who alone could solve the powerful gem's mystery.