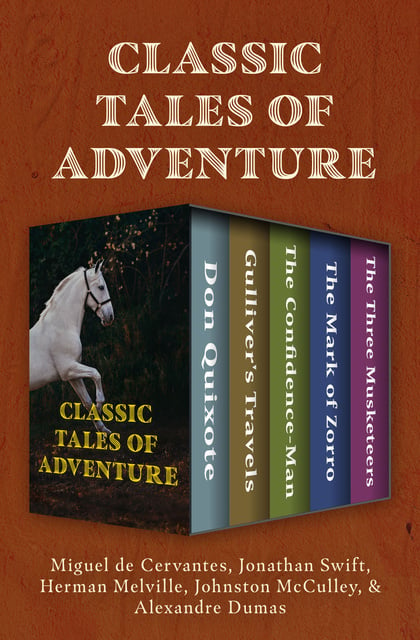 Classic Tales of Adventure: Don Quixote, Gulliver's Travels, The Confidence-Man, The Mark of Zorro, and The Three Musketeers

Classic Tales of Adventure: Don Quixote, Gulliver's Travels, The Confidence-Man, The Mark of Zorro, and The Three Musketeers

Journey to worlds both real and imagined with these timeless landmarks of literature.

Don Quixoteby Miguel de Cervantes: Considered by many to be the first modern novel, this witty epic follows the famed nobleman from La Mancha on his quest to live up to the ideals of a chivalrous knight.

Gulliver’s Travelsby Jonathan Swift: The classic satire that takes Lemuel Gulliver to Lilliput, Brobdingnag, and other fantastical corners of the world.

The Confidence-Manby Herman Melville: The intertwined tales of a group of passengers on a steamboat journey down the Mississippi River by the author of Moby Dick.

The Mark of Zorroby Johnston McCulley: Originally published as The Curse of Capistrano, this is the book that introduced masked hero Diego Vega.
The Three Musketeersby Alexandre Dumas: In seventeenth-century France, a daring young man defends the queen’s honor and tests his skills against the best swordsmen of the day.