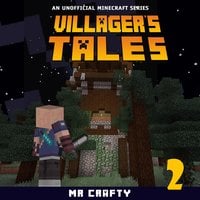 A 21,000 Word Story Packed with Fun and Adventure!

With the help of his new Enderman friend, Marco is able to escape the fiery landscape of the Nether, and make his way back to his own world. Dropped off in a strange place, he now travels into the unknown to return to his village.

Along the way, he runs into another village, but this one is far from peaceful. An Illager outpost has been built just outside its borders, and they aren’t there to play nice. Forced to make equipment and food for the Illagers, the villagers have no choice but to do as they are told, or else they will be taken to the dark tower.

With no other choice but to help the poor villagers, Marco must find a way to take down an entire towerful of Illagers and rescue the villagers that have been taken. Will Marco become the hero of the village, or will he find himself trapped behind bars far away from home once again?