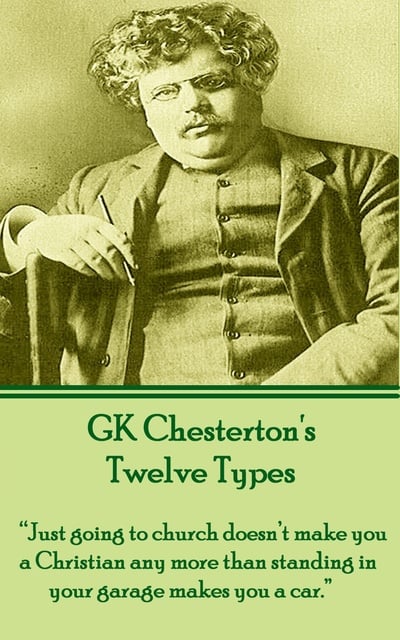 Twelve Types: “Just going to church doesn’t make you a Christian any more than standing in your garage makes you a car.”

Twelve Types: “Just going to church doesn’t make you a Christian any more than standing in your garage makes you a car.”

Gilbert Keith Chesterton, (29 May 1874 – 14 June 1936) was a poet, novelist, playwright, literary commentator, editor, biographer, journalist, orator and theologian. He was often dubbed as the “prince of paradox” for his light whimsical style that often addressed serious issues such as politics and religion. The latter was as a member and defender of the Christian faith and the former was shaped by a distrust of concentrated wealth and power. He advocated Distributionism and said that every man should be allowed to own "three acres and a cow." These political views have spread round the world, crediting Chesterton as the father of the “small is beautiful” movement. It is also said to have influenced Gandhi in seeking a genuine nationalism for India rather than imitating the British state. “Twelve Types” are unique portraits of twelve of Europe's most defining figures - Charlotte Brontë, William Morris, Byron, Pope, St. Francis of Assisi, Rostand, Charles II, Stevenson, Thomas Carlyle, Tolstoy, Savonarola, and Sir Walter Scott. Full of brilliant and witty insights “written, with all the authority of a human scripture, the eternal and essential truth that until we love a thing in all its ugliness we cannot make it beautiful." They are short on biographical substance, but very long on understanding the essence of the writers.