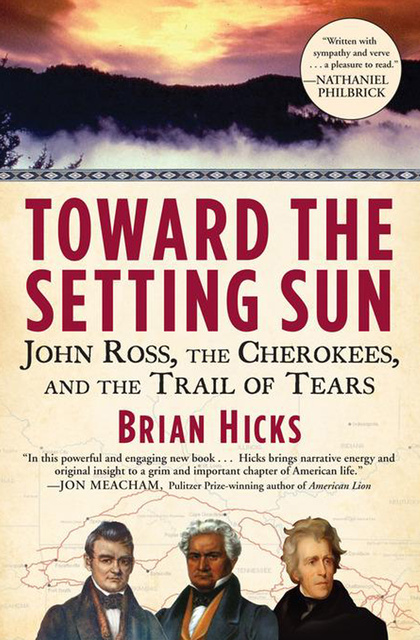 Toward the Setting Sun: John Ross, the Cherokees, and the Trail of Tears

Toward the Setting Sun: John Ross, the Cherokees, and the Trail of Tears

“Richly detailed and well-researched, ” this story of one Native American chief’s resistance to American expansionism “unfolds like a political thriller” (Publishers Weekly).

Toward the Setting Sun chronicles one of the most significant but least explored periods in American history—the nineteenth century forced removal of Native Americans from their lands—through the story of Chief John Ross, who came to be known as the Cherokee Moses.

Son of a Scottish trader and a quarter-Cherokee woman, Ross was educated in white schools and was only one-eighth Indian by blood. But as Cherokee chief in the mid-nineteenth century, he would guide the tribe through its most turbulent period. The Cherokees’ plight lay at the epicenter of nearly all the key issues facing America at the time: western expansion, states’ rights, judicial power, and racial discrimination. Clashes between Ross and President Andrew Jackson raged from battlefields and meeting houses to the White House and Supreme Court.

As whites settled illegally on the Nation’s land, the chief steadfastly refused to sign a removal treaty. But when a group of renegade Cherokees betrayed their chief and negotiated their own agreement, Ross was forced to lead his people west. In one of America’s great tragedies, thousands died during the Cherokees’ migration on the Trail of Tears.

“Powerful and engaging … By focusing on the Ross family, Hicks brings narrative energy and original insight to a grim and important chapter of American life. ” —Jon Meacham