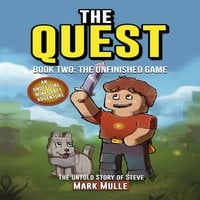 The Quest: The Untold Story of Steve, Book Two: The Unfinished Game

Explore the mysterious world of Steve and be thrilled by the exciting adventures that awaits our hero and his dog companion, Growls!

Steve is pretty sure he has what it takes to be a hero. However, after cryptic things started happening, Steve began questioning himself.

What if, he's not really meant to be a hero?
What if, all he had been doing actually don't count as a heroic deed?
Has he been just fooling himself in believing he's actually a hero?
With the mysterious human luring him in playing a mysterious game, could he really survive?
What is it that awaits him as the game commence?

Grab this audiobook now and join Steve as he seeks out the real purpose of why the mysterious human is haunting him.

This unofficial Minecraft audiobook is not authorized, endorsed or sponsored by Microsoft Corp., Mojang AB, Notch Development AB or any other person or entity owning or controlling the rights of the Minecraft name, trademark or copyrights. All characters, names, places and other aspects of the game described herein are trademarked and owned by their respective owners. Minecraft/ /TM & 2009-2016 Mojang/Notch.