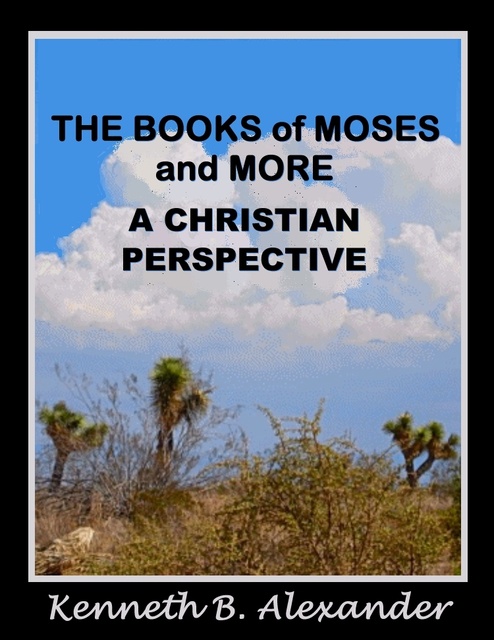 The Books of Moses and More: A Christian Perspective

The Books of Moses and More: A Christian Perspective

The name of this book is The Books of Moses and More –A Christian Perspective. The books of Moses are the first five books of the Jewish and Christian. They are Genesis, Exodus, Leviticus, Numbers and Deuteronomy. In the Hebrew Bible they are collectively known as the "Torah". The Torah books have been collectively defined as books of "instruction or teaching", which is the literal interpretation of "Torah". However the Torah has been collectively referred to as "The Law" or "The Law of Moses". In Greek, those first five books are known as the Pentateuch. In the Septuagint Greek version of the Old Testament Bible (LXX) they are called "Law" after the Greek word nomos.

Disregarding the arguments that Moses was not the author of these books (the general consensus is that he is the author) the Books present a record of the greatest manifestation of God on the earth before Christ. The acts, ways and personality of God are portrayed no better than in these books. They highlights His personality are: His love, kindness, mercy, flexibility, jealous anger and the fact that He will stop at nothing until He has a people for His own possession. The books in Moses portray a meek and humble man called to a task greater than himself. God called him the most humble man on the face of the earth.

Moses, according to the record, spoke face to face with God. This is the most unique example of God moving through a frail human vessel (excluding Christ). In return for his courage and humility God performed great and wonderful acts through him. God did not move sovereignly but through this man. This is always, to the present day, the way God moves. "Surely the Lord GOD does nothing Unless He reveals His secret counsel To His servants the prophets" (Amos 3:7).

Moses knew the Lord. He knew both His acts and His ways, which set him apart from the peoples he served. "He made known His ways to Moses, His acts [not His ways] to the sons of Israel" (Psalm 103:7). Consider the acts done by God through Moses. He delivered a nation of hundreds of thousands of people from the most powerful nation on the earth at the time (Egypt). At the same time God judged the gods of Egypt so that Egypt as a nation never returned to its former glory. He established arguably the greatest form of government known at the time. It was the first, and only, workable theocracy, governed by one God.

Moses stood between God and the people. Many times God, in His jealous anger, meant to destroy the entire nation. However, time after time, Moses changed His mind.

In the book of Genesis the lineage of the nation of Israel (and eventually Christ), is followed from Abraham, to Isaac and finally Jacob who was renamed for the nation Israel. The book details how god created the worlds from nothing by speaking a Word "Let it be". The fall of man from paradise to futility is chronicled. However that futility was imposed in hope that it would one day be restored. "For the creation was subjected to futility, not willingly, but because of Him who subjected it, in hope the creation itself also will be set free from its slavery to corruption into the freedom of the glory of the children of God" (Romans 8:20-21).

Israel means "struggle or contend with God" and the book portrays this struggle. It shows how God used any circumstance, acceptable to man or not, to preserve the lineage which became a nation. He used the cunning deceit of man (Jacob) and the unbelief of a man (Abraham) in order to fulfill His purpose. He established the principle that it is by faith that we prevail with God. The book is a perfect example of the words of the New Testament: "And we know that God causes all things to work together for good to those who love God, to those who are called according to His purpose" (Romans 8:28). The book details the lineages of men He rejected (Esau, Ishmael perhaps Lot). However, even to those He rejected He showed compassion by making nations of them. Their descendants, however, became the enemies Israel eventually confronted in the Promised Land.

The Old Testament, and the Books of Moses specifically. are images of heavenly things. Hebrews (8;4-5) says: "Now if He [ speaking of Christ] were on earth, He would not be a priest at all, since there are those who offer the gifts according to the Law; who serve a copy and shadow of the heavenly things" (Hebrews 8:4-5). Included in this book are detailed descriptions of how the Old Testament Feasts and rituals apply to Christianity today. The Books of Moses, rich in detail of the methods of forgiving sin by sacrifice and obedience, show the greatness of Christ's sacrifice which provided salvation once for all eternally. The Old Testament sacrifices provided forgiveness for sin but only temporarily.

Hebrews explains the evolution of the old method of forgiving sins (called the Old Covenant) with the New Covenant initiated by Christ which forgives sins eternally by one sacrifice. Under the Old covenant sins were temporarily forgiven by application of ritual sacrifice. But under Christ it was His blood, not the blood of animal sacrifices, that forgave sin eternally.

"Now even the first covenant had regulations of divine worship and the earthly sanctuary (Exodus 25:8). For there was a tabernacle prepared, the outer one, in which were the lampstand and the table and the sacred bread; this is called the holy place (Exodus 25:23-29). Behind the second veil (Exodus 26:31-33) there was a tabernacle which is called the Holy of Holies, (Exodus 26:33). having a golden altar of incense (Exodus 30:1-5) and the ark of the covenant (Exodus 25:10) covered on all sides with gold, in which was a golden jar holding the manna, and Aaron's rod which budded (Numbers 17:10), and the tables of the covenant; and above it were the cherubim of glory (Exodus 25:1) overshadowing the mercy seat; (Exodus 25:19). but of these things we cannot now speak in detail. Now when these things have been so prepared, the priests are continually entering the outer tabernacle performing the divine worship, but into the second, only the high priest enters (Exodus 20:10) once a year, not without taking blood, which he offers for himself and for the sins of the people committed in ignorance (Numbers 15:25). The Holy Spirit is signifying this, that the way into the holy place has not yet been disclosed while the outer tabernacle is still standing, which is a symbol for the present time. Accordingly both gifts and sacrifices are offered which cannot make the worshiper perfect in conscience, since they relate only to food and drink and various washings, regulations for the body imposed until a time of reformation.

The New Covenant: "But when Christ appeared as a high priest of the good things to come, He entered through the greater and more perfect tabernacle, not made with hands, that is to say, not of this creation; and not through the blood of goats and calves, but through His own blood, He entered the holy place once for all, having obtained eternal redemption. For if the blood of goats and bulls and the ashes of a heifer sprinkling those who have been defiled sanctify for the cleansing of the flesh, how much more will the blood of Christ, who through the eternal Spirit offered Himself without blemish to God, cleanse your conscience from dead works to serve the living God? For this reason He is the mediator of a new covenant, so that, since a death has taken place for the redemption of the transgressions that were committed under the first covenant, those who have been called may receive the promise of the eternal inheritance (Hebrews 9:1-15).

By Christ initiating the New Covenant the Old Covenant was rendered obsolete. Righteousness was no longer obtained by obeying the Law but, according to God's covenant with Abraham, it was forgiven by faith in Christ. Christ fulfilled all of the laws for us. No longer are we obligated in ourselves to keep the law; Christ did it for us. Christ said: "Do not think that I came to abolish the Law or the Prophets; I did not come to abolish but to fulfill. "For truly I say to you, until heaven and earth pass away, not the smallest letter or stroke [jot or tittle] shall pass from the Law until all is accomplished" (Matthew 5:17-18).

Ancient Israel, for whom the law was written, was never able to fulfill the Law in themselves. Their failure became our tutor, showing us that the law cannot be fulfilled through our own efforts. "But before faith came, we were kept in custody under the law, being shut up to the faith which was later to be revealed. Therefore the Law has become our tutor to lead us to Christ, so that we may be justified by faith. But now that faith has come, we are no longer under a tutor" (Galatians 3:23-25).

Therefore the Old Testament, and the Books of Moses, become the foundation of our faith. The law becomes our fulfillment, not our obligation. We, as Christ, will become the Law. As Hebrews 8:10 says: "FOR THIS IS THE COVENANT THAT I WILL MAKE WITH THE HOUSE OF ISRAEL AFTER THOSE DAYS, SAYS THE LORD: I WILL PUT MY LAWS INTO THEIR MINDS, AND I WILL WRITE THEM ON THEIR HEARTS. AND I WILL BE THEIR GOD, AND THEY SHALL BE MY PEOPLE" In other words it will become our nature not to sin which will unlock all the promises of God to us. When our ways are pleasing to the Lord we inherit His Kingdom.

Hopefully this book will convey an understanding of the Old Testament as it relates to Christianity today. Rather than being an obsolete recitation of history it is a living reality in Christ. Jesus said to the Pharisees: "You search the Scriptures because you think that in them you have eternal life; it is these that testify about Me;" (John 5:39). So we too receive Christ's life from the Old Testament as well as the new. . 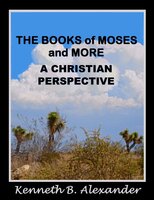