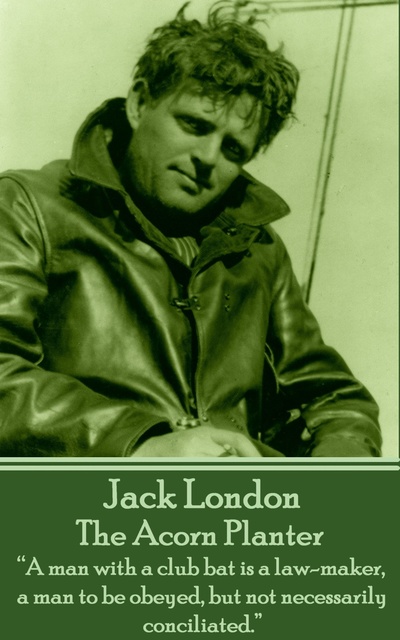 The Acorn Planter: “A man with a club bat is a law-maker, a man to be obeyed, but not necessarily conciliated.”

The Acorn Planter: “A man with a club bat is a law-maker, a man to be obeyed, but not necessarily conciliated.”

John Griffith "Jack" London was born John Griffith Chaney on January 12th, 1876 in San Francisco. His father, William Chaney, was living with his mother Flora Wellman when she became pregnant. Chaney insisted she have an abortion. Flora's response was to turn a gun on herself. Although her wounds were not severe the trauma made her temporarily deranged.

In late 1876 his mother married John London and the young child was brought to live with them as they moved around the Bay area, eventually settling in Oakland where Jack completed grade school. Jack also worked hard at several jobs, sometimes 12-18 hours a day, but his dream was university. He was lent money for that and after intense studying enrolled in the summer of 1896 at the University of California in Berkeley.

In 1897, at 21 , Jack searched out newspaper accounts of his mother's suicide attempt and the name of his biological father. He wrote to William Chaney, then living in Chicago. Chaney said he could not be London's father because he was impotent; and casually asserted that London's mother had relations with other men. Jack, devastated by the response, quit Berkeley and went to the Klondike. Though equally because of his continuing dire finances Jack might have taken that as the excuse he needed to leave. In the Klondike Jack began to gather material for his writing but also accumulated many health problems, including scurvy, hip and leg problems many of which he then carried for life. By the late 1890's Jack was regularly publishing short stories and by the turn of the century full blown novels.

By 1904 Jack had married, fathered two children and was now in the process of divorcing. A stint as a reporter on the Russo-Japanese war of 1904 was equal amounts trouble and experience. But that experience was always put to good use in a remarkable output of work. Twelve years later Jack had amassed a wealth of writings many of which remain world classics. He had a reputation as a social activist and a tireless friend of the workers.

And yet on November 22nd 1916 Jack London died in a cottage on his ranch at the age of only 40. Here we present The Acorn Planter.