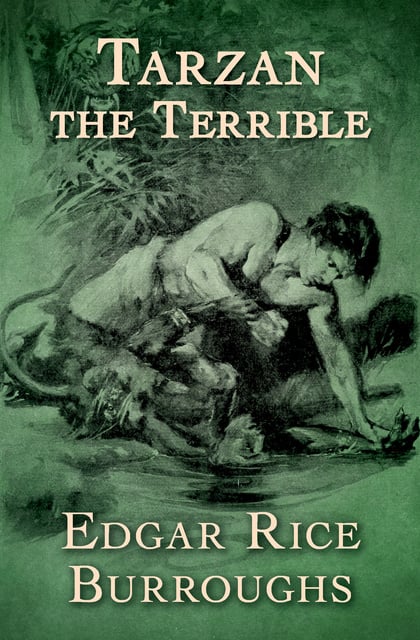 In this 1921 adventure novel from the original Tarzan series, the ape man discovers a lost world of dinosaurs where his beloved Jane is being held captive.

When World War I broke out across the African colonies, an attack on Tarzan’s estate led him to believe his wife Jane had been killed by Imperial German soldiers. But after a months-long rampage of vengeance, he learns she is in fact still alive—he only need find her. Before long, his search will take him from the modern threats of tanks and war planes into a land of prehistoric dangers.
In the hidden valley of Pal-ul-don, dinosaurs continue to thrive, and the warrior tribes of the Ho-don and Waz-don—who appear to be human apart from their tails—are locked in bitter conflict. Somewhere in Pal-ul-don, Jane is being held captive. But to save her, Tarzan must survive a gauntlet of deadly enemies with a display of strength and skill that will earn him the name Tarzan the Terrible.