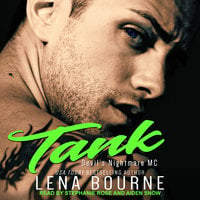 Tank: I always had a thing for redheads, but between their wildness and fiery temper, I kept getting burned. Now that I'm VP of my motorcycle club, my wild and crazy days are over. But I lost none of my taste for redheads. So when Kim, the first redhead I've ever known who can keep her fire hidden behind a cool, though slightly uptight exterior appears in my life, the only sensible thing to do is go after her. Catch her, tame her and maybe even keep her. And she's not resisting either. She wants to be caught.

There's only one problem. I'm an outlaw biker, a killer wanted in five states, and she's the Sheriff's daughter. They say love conquers all, but this might be the exception that proves the rule.

Kim: I've always been the good girl. From taking care of my mother and my brother with Down Syndrome after my dad died, to becoming an internationally-renowned investigative journalist by the age of thirty-two. Now I'm burned out and living at home again, taking care of my frail mother while my step-dad campaigns for county Sheriff. I deserve a break and I deserve to have some fun, not that I've ever let myself enjoy much of either.

When Tank, a bad boy every girl dreams about having at least once, starts chasing me, I decide to do something for myself for a change. What I didn't expect was to fall for him quite so hard. Nor was I ready for the secrets he keeps and how they could destroy my whole family, the one thing I've spent my whole life preventing.