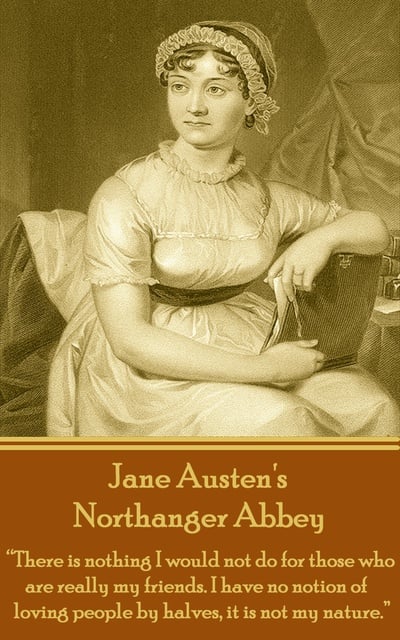 Northanger Abbey: "There is nothing I would not do for those who are really my friends. I have no notion of loving people by halves, it is not my nature."

Northanger Abbey: "There is nothing I would not do for those who are really my friends. I have no notion of loving people by halves, it is not my nature."

Northanger Abbey is one of Jane Austen’s earliest novels which is believed to be influenced by the Gothic works of Ann Radcliffe. The story centers around Catherine Morland, a country churchman’s daughter who is fond of Gothic fiction. The story starts when Catherine is invited by her wealthy family friends to visit the famous town of Bath. She soon falls in love with the young gentleman Henry Tilney whose erudition and interest in fiction and history simply enchant her. She is later invited to visit Northanger Abbey, Henry’s ancient family estate and expects the Abbey to be similar to the castles she is familiar with in the Gothic novels that she reads. However, she discovers that the building is far from being Gothic save for the mysterious suite of deserted rooms belonging to Henry’s dead mother. Catherine imagines that the rooms hide some secret about the woman’s death, suspecting that Henry’s father may have killed her. When she finally sneaks into the rooms, she finds absolutely nothing that confirms her Gothic visions. Furthermore, she is caught by Henry who, after hearing about her motivations, informs her that his parents really loved each other. Catherine is finally convinced that despite their entertaining capacity, novels are not necessarily a faithful representation of every-day life. We’ve also included a concise and informative biography of Jane’s works and life at the end of the book. We hope it helps to give a little context and colour about how her life interacted with her art.