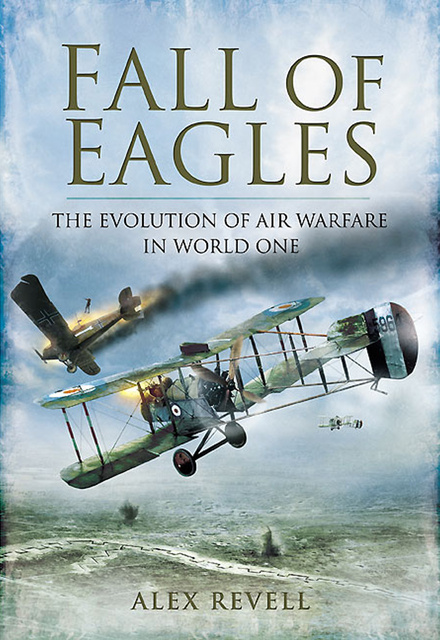 Fall of Eagles: Airmen of World War One

Fall of Eagles: Airmen of World War One

The Great War of 1914–1918 saw the rapid development of the airplane as a weapon of war. Initially its role was seen as that of reconnaissance, an extension of the cavalry, but as the war stagnated into static trench warfare, with each side facing each other across No Mans Land, the use of artillery, both in shelling enemy positions and counter-shelling his artillery, also became of prime importance.

With the early development of radio communication between ground and air, airplanes also undertook the task of spotting for the artillery, and it soon became apparent that these airplanes both the reconnaissance machines and those working for the artillery could not be allowed to work unmolested, and fast fighter airplanes—both single and two seat began to make their appearance over the Western Front.

Technical development was rapid. The mostly unarmed reconnaissance airplanes, and the early fighters of 1915 and 1916, armed with a single machine gun, had given way to fighters carrying two guns, flying at altitudes of over 16,000 feet and at treble the speed of the predecessors of 1914. With these developments a new type of soldier had evolved: the fighter pilot. Capable of fighting in the air, in three dimensions and at great speed, individual pilots began to emerge whose singular talents and temperament brought them to the forefront of their respective air forces.

They became the aces, pilots who had brought down five or more of the enemy. Despite their expertise, few of these aces survived the war. The last combats of some are known and well documented, others are obscure. Some of the pilots in these pages are well-known, others less so, but all shared the common experience of fighting in the air during the war of 1914–1918: the conflict which saw the airplane evolve from a relatively fragile, unarmed reconnaissance machine, to a deadly weapon that changed the face of war for ever.