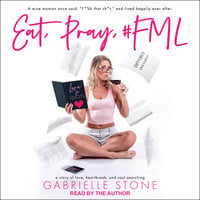 A year and a half into our marriage, I found out my husband had been having an affair with a nineteen-year-old for six months. I filed for divorce and left.

Two weeks later I met a man, and we fell madly in love. It was a fairy-tale romance for a month and a half, and he convinced me to join him on a romantic month-long vacation in Italy. Forty-eight hours before we were supposed to get on a plane, he told me he needed to go by himself. I was devastated. So, I had a decision to make. Either stay home and be heartbroken, or go travel Europe for a month by myself. And staying at home heartbroken? F%*k. That.

What does a woman do when her life has fallen apart and her heart has been ripped out and stepped on twice in two months? She goes on a wild adventure, makes some bad decisions, and does a sh*t load of soul searching. But most importantly? She finds out how to love … herself.

This is so not Eat, Pray, Love.