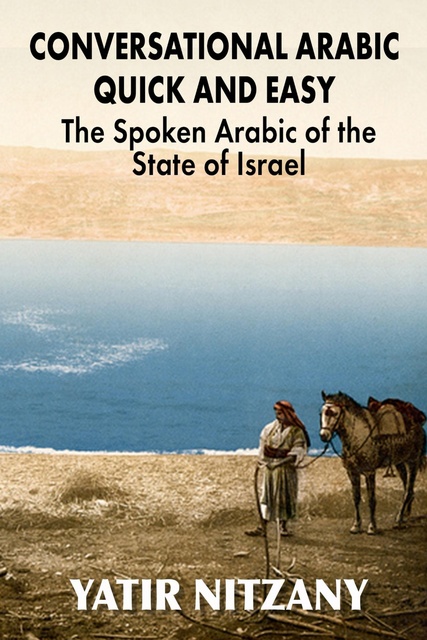 Note from the author: This book is very similar to my other title, "Conversational Arabic Quick and Easy: Palestinian Dialect, " so I recommend you either purchase one or the other, but not both.

THIS BOOK DOESN'T CONTAIN ANY ARABIC LETTERS! ALL ARABIC WORDS IN THIS BOOK WERE WRITTEN IN ENGLISH-TRANSLITERATION!

The State of Israel has two official languages, Hebrew and Arabic. Israel's Arab minority consists of roughly 21 percent of its population, most of whom are fluent in the Hebrew language; however, all speak Arabic as well. The spoken Arabic of Israel is considered a Palestinian dialect, despite a few slight variations.

Have you always wanted to learn how to speak the Arabic dialect of the State of Israel but simply didn't have the time?

Well if so, then, look no further. You can hold in your hands one of the most advanced and revolutionary method that was ever designed for quickly becoming conversational in a language. In creating this time-saving program, master linguist Yatir Nitzany spent years examining the twenty-seven most common languages in the world and distilling from them the three hundred and fifty words that are most likely to be used in real conversations. These three hundred and fifty words were chosen in such a way that they were structurally interrelated and, when combined, form sentences. Through various other discoveries about how real conversations work--discoveries that are detailed further in this book--Nitzany created the necessary tools for linking these words together in a specific way so that you may become rapidly and almost effortlessly conversant--now.

If your desire is to learn complicated grammatical rules or to speak perfectly proper and precise Arabic, this book is not for you. However, if you need to actually hold a conversation while on a trip to the Holy Land, to impress that certain someone, or to be able to speak with your grandfather or grandmother as soon as possible, then the Nitzany Method is what you have been looking for. This book is recommended for those who already have some prior knowledge of the pronunciation of Arabic accents (such as the Arabic accents: ayin, ghayn, ha, and khaf). For those of you who do not, this book does indeed provide some great, in-depth techniques on the pronunciation and recognition of these accents, that you will encounter throughout the program. These techniques have proven extremely beneficial for beginner students who were previously unfamiliar with these accent pronunciations. But keep in mind this isn't a pronunciation book.

This method is designed for fluency in a foreign language, while communicating in the first person present tense. Nitzany believes that what's most important is actually being able to understand and be understood by another human being right away. Therefore, unlike other courses, all words in this program are taught in English transliteration, without having to learn the complex alphabet. More formalized training in grammar rules, etc. , can come later.

This is one of the several, in a series of instructional language guides, the Nitzany Method's revolutionary approach is the only one in the world that uses its unique language technology to actually enable you to speak and understand native speakers in the shortest amount of time possible. No more depending on volumes of books of fundamental, beginner, intermediate, and advanced levels, all with hundreds of pages in order to learn a language. With Conversational Arabic Quick and Easy, all you need are fifty-three pages.

Learn Arabic today, not tomorrow, and get started now!