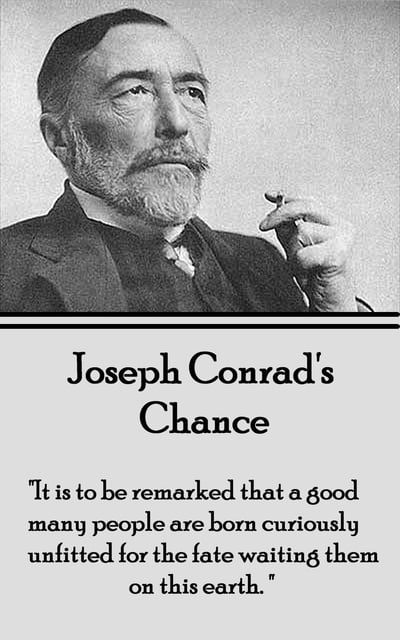 Józef Teodor Konrad Korzeniowski (3rd December 1857 – 3rd August 1924) was a Polish author regarded as one of the greatest novelists in English, although he did not speak the language fluently until he was in his twenties when he settled in England and was subsequently granted British nationality. He was a master prose stylist, who brought a a deeper understanding of the human psyche and a distinctly tragic sensibility into English literature that is clearly demonstrated in “Chance”, his most popular commercial book on initial publication. It tells the story of Flora de Barral, the vulnerable abandoned daughter of a bankrupt tycoon, who struggles to achieve dignity and happiness; 'no consideration, no delicacy, no tenderness, no scruples should stand in the way of a woman … from taking the shortest cut towards securing for herself the easiest possible existence. ’ It is narrated by different narrators, including Conrad's regular narrator, Charles Marlow, who describe and attempt to interpret various episodes in Flora’s life and is the only book to focus on a female character.

Chance was published in 1914 at a time when financial speculation and feminism dominated public debate as they currently do today, making this moving and wonderfully written book still very relevant.