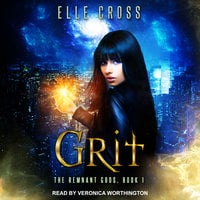 A montage of his life flickered before my eyes. I felt every joy, heartbreak, triumph, and defeat. And then there was nothing but terror . . .

For years, powerful empath Vesper Tallinn has kept herself isolated from the rest of the world. Because of her ability to manipulate emotions, she has the tendency to draw dangerous people to her. She can count the number of people she trusts on one hand, because in her experience, it's altogether safer to be alone. Not only that, but keeping her head down keeps her off the radar of the Remnant Gods, powerful and ancient beings whose behavior is unpredictable at best.

But thanks to Corbin Troy, her police detective best friend, Vesper is pulled into an extremely disturbing murder investigation. Bodies keep turning up, and the emotions Vesper senses are terrifying and dark, oozing with cruelty and malice. Both the culprit and motive remain a mystery, but one thing is clear: the Remnant Gods are somehow involved. But are they the victims? Or the perpetrators?

Vesper finds herself caught in a web of intrigue and magic, leading her on a search through bars and sex clubs, crime scenes and portals, as she tries to track down a killer . . . and the mysterious Lord Master, who might hold the clue to the entire case.

Over the course of the investigation, Vesper finds herself drawn to Deimos, the most powerful, enigmatic man in the city. He's clearly more than human and it's obvious he's tangled up in the case. Deimos has no interest in discussing it with Corbin, because in his opinion, this is a matter for the Remnant Gods. Vesper, though, is another matter. Deimos is fascinated by her and seems intent on having her in his life . . . and his bed.

All of which begs the question: Is he friend or foe?

And how much is Vesper willing to risk to find out?