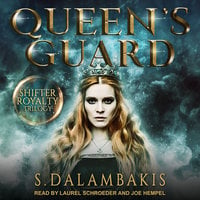 All Callyn thought about was surviving each day and making it through senior year. All that changed the day she met her four mates. Zeke, Graydon, Lucian, and Maximus gave her something else she desperately needed . . . hope. After barely surviving at the hands of her abusive father, Callyn learns something about herself. She is shifter royalty and the next Alpha Queen.

With her father in jail and her aunt on her way to Camden Falls, Callyn hopes that she can lead some sort of normal life. She quickly realizes that's not going to be the case. Callyn doesn't just have Kelsey to contend with but new threats as well. Add on to that, she still needs to learn what it means to be Alpha Queen.

Let's not forget, she can't shift . . . yet. The boys are also learning more about themselves and their new abilities. As Callyn and the boys learn to navigate their new lives, they still have the biggest threat of all to worry about . . . war. Things are set into motion and the threats are real.

As Callyn and her mates grow closer, their bond grows stronger. They will need each other to overcome their enemies.