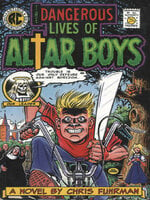 The Dangerous Lives of Altar Boys: A Novel

The basis for the film starring Kieran Culkin. “Evoked with the rare, genuine sort of candor that made Holden Caulfield—and J.D. Salinger—famous.”—Vogue

Set in Savannah, Georgia, in the early 1970s, this is a novel of the anarchic joy of youth and encounters with the concerns of early adulthood. Francis Doyle, Tim Sullivan, and their three closest friends are altar boys at Blessed Heart Catholic Church and eighth-grade classmates at the parish school. They are also inveterate pranksters, artistic, and unimpressed by adult authority. When Sodom vs. Gomorrah ’74, their collaborative comic book depicting Blessed Heart’s nuns and priests gleefully breaking the seventh commandment, falls into the hands of the principal, the boys, certain that their parents will be informed, conspire to create an audacious diversion. Woven into the details of the boys’ preparations for the stunt are touching, hilarious renderings of the school day routine and the initiatory rites of male adolescence, from the first serious kiss to the first serious hangover.

“The freshness of Fuhrman’s novel comes from his ability to squeeze out of a time of transition universal evocations of rebellion against growing up . . . Fuhrman provides his story and characters with enough originality to keep the narrative clipping along and his reader totally absorbed.”—Chicago Tribune

“Heartbreaking yet hilarious . . . chronicles a school year in the life of narrator Francis Doyle, an eighth-grader at the parish school of the Blessed Heart . . . can be compared to many of the classic coming-of-age novels.”—Publishers Weekly