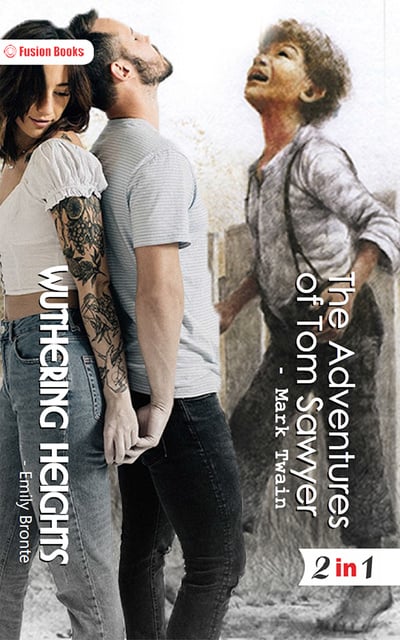 Wuthering Heights and The Adventures of Tom Sawyer

Wuthering Heights and The Adventures of Tom Sawyer

Emily Bronte was an English novelist & poet, who is best known for her only novel, "Wuthering Heights: She has written poems also such as - Poems by Currer, Ellis and Action Bell, A Death Scene, To a Wreath of Snow, and lots Many. Wuthering Heights is a highly imaginative work of passion and hate. Author was interested in mysticism and used to enjoy her solitude outdoors. This novel consists of those elements. It is now considered a classic of English literature. It was published under the pseudonym -"Ellis Bell. The story is full of high creativity and very imaginative. It narrates revenge also. It revolves around the main character, Heathcliff. Wuthering Heights is his farmhouse. Heathcliff is a young orphan, who was brought by Earnshaw at Wuthering Heights, 30 years ago. Earnshaw loves him (Heathcliff) so much, even neglects his own children. After death of Earnshaw, his elder son Hindley becomes the new master of Wuthering Heights and he allows Heathcliff to stay there only as a servant. Catherine is in love with Heathcliff, but doesn't show due to her social statue. The story thus seems very interesting and it ends with sights of the ghosts of Catherine and Heathcliff. It consists of many ups and downs Readers will Surely going to enjoy the novel. Its Heartthrobing and its very difficult to getup without reading the novel - fully.

The Adventures of Tom Sawyer

Mark Twain, the author was an American Writer & Humorist. His real name is Samuel Longhorne Clemens. Mark Twain is the pen name. His notable works are The Adventures of Tom Sawyer & Adventures of Huckleberry Finn. In his credit, there are 28 books and numerous Sketches & Short stories. The Adventures of Tom Sawyer came out in 1869. It features one of the best-loved characters in American fiction. Mark Twains famous short stories are: The War Prayer, A Dogs Tale, Eves Diary, A Ghost Story, Luck, Advice to little Girls, Cannibalism in the Cars, and lot many… This novel is about a boy growing up along the Mississippi River. Tom Sawyer has several adventures, after with his friend Huckleberry Finn. An Excerpt: Tom falls in love with Becky Thatcher, a new girl in town wins the admiration of the judge in the church by obtaining the Bible as a prize but reveals his ignorance when he is unable to answer basic questions about Scripture. Tom pursues Becky, eventually persuading her to get engaged by kissing him. Their romance soon collapses when she discovers that Tom was engaged to another school girl… The book has been widely adapted into feature films and Television Series. A must-have book for everyone.