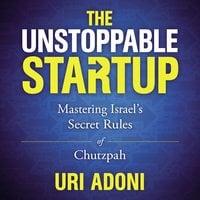 Discover the bold secrets to Israel’s incredible track record of success in this new guide that will help make any startup unstoppable.

More than half of all startups fail - often during the crucial early stages of development when they need t prove their viability on a limited budget. However, when it comes to startup success, one country stands out: Israel.

Even though it is a relatively small country, Israel has one of the highest concentrations of startups in the world, has the highest venture capital per capita, is one of the top countries in terms of number of companies listed on NASDAQ, and is well-recognized as a global leader in research and development.

In The Unstoppable Startup,?veteran venture capitalist Uri Adoni goes behind the scenes to explain the principles and practices that can make any startup, anywhere in the world, become an unstoppable one.

Packed with insider accounts from leaders who have realized bold visions, The Unstoppable Startup distills Israeli chutzpah into six operational rules that will help you to:

• Build an unstoppable team;
• Foresee the future and innovate to meet its demands;
• Manage your funding and partnerships through all phases of growth;
• Dominate the market category you are after or create a new one;
• Build and manage an early stage investment vehicle;
• Build and grow a healthy high-tech ecosystem.

Adoni implemented these practices throughout his more than 12 years as a venture capitalist for one of Israel's most successful venture funds, and he continues to utilize these same proven startup strategies today in metropolitan areas in the US.

The Unstoppable Startup provides readers with insights and operational advice on how to run a startup, and how to overcome challenges?that almost every startup faces.