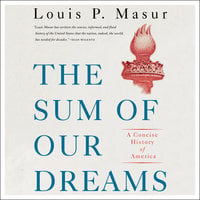 The Sum of Our Dreams: A Concise History of America

In The Sum of Our Dreams, Louis P. Masur offers a sweeping yet compact history of America from its beginnings to the current moment. Evoking Barack Obama's belief that America remains the "sum of its dreams," Masur locates the origin of those dreams—of freedom, equality, and opportunity—and traces their progress chronologically, illuminating the nation's struggle over time to articulate and fulfill their promise. Moving from the Colonial Era, to the Revolutionary Period, the Early Republic, and through the Civil War, Masur turns his attention to Reconstruction, the Gilded Age, the Progressive Age, World War One, the Great Depression, World War Two, the Cold War, Civil Rights, Vietnam, and Watergate, and then lays out clearly and concisely what underlies the divisiveness that has characterized American civic life over the last forty years—and now more than ever. Above all, however, Masur lets the story of American tell itself. Inspired by James Baldwin's observation that "American history is longer, larger, more beautiful and more terrible than anything anyone has ever said about it," he expands our notion of that history while identifying its individual threads. The Sum of Our Dreams will be the new go-to single volume for anyone wanting a foundational understanding of the nation's past, and its present.