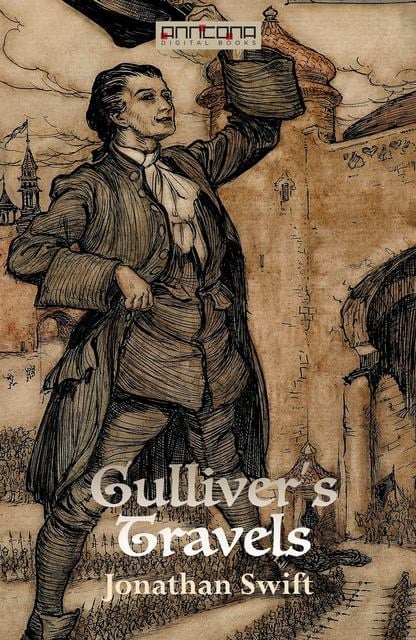 Gullivers Travels, or Travels into Several Remote Nations of the World. In Four Parts. By Lemuel Gulliver, First a Surgeon, and then a Captain of Several Ships, commonly known as Gulliver's Travels (1726), is a prose satire by Irish writer and clergyman Jonathan Swift, that is both a satire on human nature and a parody of the "travellers' tales" literary subgenre. It is Swift's best known full-length work, and a classic of English literature.
The book became popular as soon as it was published. John Gay wrote in a 1726 letter to Swift that "It is universally read, from the cabinet council to the nursery." Since then, it has never been out of print.
The novel is divided in four parts:
Part I: A Voyage to Lilliput
Part II: A Voyage to Brobdingnag
Part III: A Voyage to Laputa, Balnibarbi, Luggnagg, Glubbdubdrib, and Japan
Part IV: A Voyage to the Country of the Houyhnhnms
Jonathan Swift (1667-1745) was an Anglo-Irish satirist, essayist, political pamphleteer (first for the Whigs, then for the Tories), poet and cleric who became Dean of St Patrick's Cathedral, Dublin. He is regarded by the Encyclopædia Britannica as the foremost prose satirist in the English language, and is less well known for his poetry.
Swift is remembered for works such as Gulliver's Travels, A Modest Proposal, A Journal to Stella, Drapier's Letters, The Battle of the Books, An Argument Against Abolishing Christianity and A Tale of a Tub.