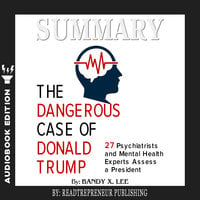 Summary of The Dangerous Case of Donald Trump: 37 Psychiatrists and Mental Health Experts Assess a President by Brandy X. Lee

​The Dangerous Case of Donald Trump: 27 Psychiatrists and Mental Health Experts Assess a President by Bandy X. Lee - Book Summary - Readtrepreneur
(Disclaimer: This is NOT the original book, but an unofficial summary.)

Is he dangerous or is he not? Experts agree he is. Take a look and see just how much. The Dangerous Case of Donald Trump gives us an alarming overview of everything that is wrong with the President of the United States of America. As you will see, each participant in the book has their view of which aspect of the President's personality is the most disturbing. With whom do you agree the most?

(Note: This summary is wholly written and published by readtrepreneur. It is not affiliated with the original author in any way)

"There are those who still hold out hope that this president can be prevailed upon to listen to reason and curb his erratic behavior. Our professional experience would suggest otherwise." - Bandy X. Lee

Ever since the elections in November 2016, most Americans have asked themselves what they never thought they would ask about their president: Is he insane? A year later, a group of 27 psychiatrists and mental health experts deliver a report containing their expert opinions on his diagnoses. Over two dozen experts deliver their opinion on the danger Donald Trump poses for the United States and the world. Just how big of a danger is he?

P.S. The Dangerous Case of Donald Trump is a controversial, yet necessary book that reflects on the mental health of the world's most powerful man.